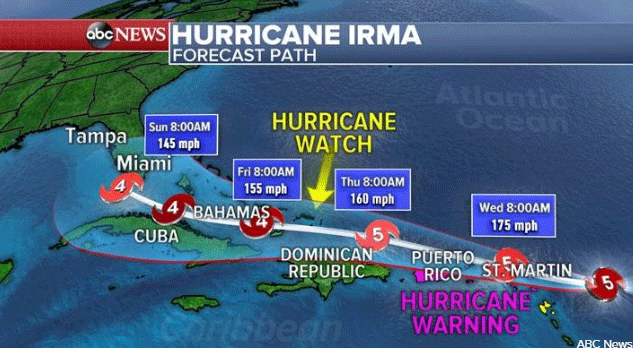 Mr Taylor , Co founder & Company Managing Director announced that in consideration of customer safety, we are recalling all cars that are out with customers and moving all the cars to secure storage at our branches in Miami and St Maarten until hurricane Irma passes.

At this present time our branches in Jamaica are not affected but this could change.

If the customer is not in the area of the storm then they will not be affected but Airports are due to close and many flights cancelled.

Hurricane Irma has strengthened to a Category 5 storm, and catastrophic damage is possible in the Florida Keys and southern Florida this weekend as a second storm has formed behind it.

Irma was packing 185 mph winds and gusts of more than 200 mph as of 2 a.m. ET Wednesday, and is expected to continue churning with deadly hurricane-force winds and a dangerous storm surge across a wide swath of the Caribbean this week before moving toward southern Florida, according to the National Hurricane Center (NHC).

Travelers unlucky enough to have flights or cruises to or from Miami this week will likely get caught in the string of cancellations coming for South Florida as Hurricane Irma barrels across the Atlantic.

By Tuesday, airlines had begun canceling flights and cruise lines adjusted itineraries, with more disruptions expected in the following days. Irma’s winds clocked in at 185 miles per hour Tuesday afternoon, making it the strongest Atlantic hurricane ever recorded outside of the Gulf of Mexico and Caribbean.

[Car Rental](https://www.right-cars.com/) Disruption Due to Hurricane Irma, we expect the branches to be fully operational by Monday 11th September after the hurricane has passed.....